41 Years of Service and Healing 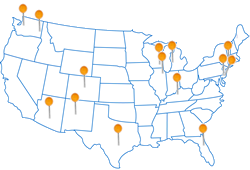 The creation of Healing the Children began with one child. In 1974 an American couple lost their newly adopted Korean daughter to an illness that could have been treated with inexpensive medication had it been available in her native country. From this tragedy a vision to help children who lacked access to specialized medical care was born.

A few years later this couple heard of another child from Guatemala who would soon die without a surgical procedure that was not offered there. They arranged to bring the child to the United States to receive life-saving surgery and Healing the Children was formed. That was the first healing act of Healing the Children which led to the formation of the organization in 1979.

Today there are 14 chapters spread across the United States. Healing the Children Rocky Mountains is the newest chapter and was formed in 2014. It was noticed that there are so many people who want to make a difference in the world and help children, but often just need a vehicle to allow them to serve. So the Rocky Mountains chapter is focused on bringing together teams of volunteers from Colorado and Utah to provide free care to children around the globe and around the corner in our own communities.

The Rocky Mountains chapter also started with a married couple from Denver who decided they want to spend their lives giving back to others and helping children. After participating in two amazing missions to Peru through Healing the Children Northeast, they decided to start a local chapter of Healing the Children to provide a way for volunteers in the Rockies to get involved with such important work. That desire and vision has spread to many in Colorado and Utah as we continue to partner with HTCNE in Lima, Peru and expand to reach more children in other countries.